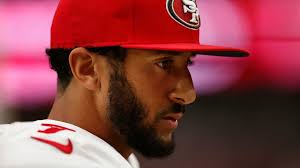 Oppression the prolonged cruel or unjust treatment or control is probably going to cost this man his job he’s only standing up for his civil rights to him it has nothing to do with Flag are the man and woman who fight for our country he just bring attention to the racial unjust that’s going on in the country today so because of that and his willingness not to keep a blind eye to things happening. He doesn’t have to stand for the National Anthem it’s not a law but Colin Kaepernick stand up for what you believe the only thing I would have done different I would have gotten some of the other players that have your same belief instead of by yourself so the stance wouldn’t just cost you your job alone but make them twice about firing a group rather than you alone.

This site uses Akismet to reduce spam. Learn how your comment data is processed.